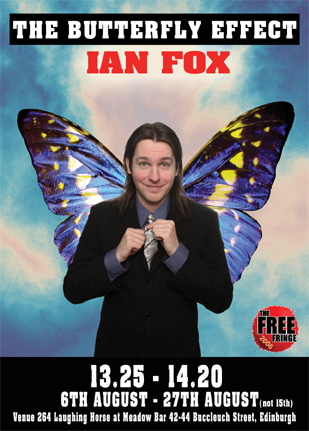 “Can a butterfly flapping it’s wings in the Amazon cause a tornado in Texas?”

First performed at the Edinburgh Fringe Festival in 2006. My most successful show to date. We recorded a BBC Radio Comedy pilot based on this show at the Oxford Road studios in Manchester on 16th April 2007. It starred Jo Enright, James Quinn, myself and Dave Turquoise. It was produced by Paul Hardy and Sally Harrison.

Can a butterfly flapping its wings in the Amazon cause a tornado in Texas?

The theory of the Butterfly Effect states how seemingly trivial events can have huge consequences and explains how one ninny’s inability to text the word spaghetti can lead to a 15 mile tailback on the motorway.

The Butterfly Effect is a small part of Chaos theory, one of the most recent and radical sciences which explains how the universe is as unpredictable as a coach load of drunken granddads.

Essentially a show about chain reactions that moves from stand up comedy to stand up fiction with a selection of interconnecting short stories presented and performed by their author.

Never before has there been a show at the fringe festival about chaos yet this year two shows arrive, both from comedians called Ian (the other show by Ian Stone) and both sat next to each other in the fringe programme. How perfectly chaotic!

Ian Fox is a mild-mannered, long-haired, really rather charming young man the preparation of whose Edinburgh show has been made extremely difficult by circumstances. And George Clooney. But you wouldn’t know, because his hour is a fascinating, funny and engaging one. And yes, it does explore, at some length, The Butterfly Effect – Lorenz’s idea of cause and effect which eventually led to Chaos Theory.

We get there gently, through chat about fetishes and phobias, Dairylea slices, free porn, a great little piece about McDonald’s and some glorious fantasising about producing a film through the internet. Fox’s observations about how great discoveries have all been made by people doing nothing is smartly funny. The show does slightly die away over the course of the overlong story that he ends with. However, he does, endearingly, warn us that this part of the show could go wrong, and that if it does there is nothing he can do about it because it is a scripted story. Fox’s show is part of the Free Fringe, which is a very happy hunting ground for comedy this year. (3/5)

This is an excellent debut show from Manchester based comic Ian Fox. Tucked away at the Meadows Bar; it would not be out of place at one of the swankier venues. His quick delivery engages your attention from the off and he obviously has a great ear for the rhythm of natural speech. There’s something very satisfying about having ASBO, EBay and ER all in the same sentence.

As with many catchwords, we all think we know what the Butterfly Effect is, but his various analogies for it help fix if firmly in the mind. (It demonstrates a chain reaction which leads from a trivial incident to a massive result, by tiny knock-on effects) and the story of its discovery by Edward Lorenz is fascinating and relevant and,in Fox’s hands, very amusing.

The facts and the science in the first section are interspersed with some excellent lines and ideas, seamlessly blending natural club comedy with higher intent ­ there’s plenty to think about here.

The middle section of the show places psychic prediction under scrutiny. (Yes, it is all bollocks). Illustrated with fascinating examples, one cites an uncanny coincidence in a Daily Telegraph crossword and a sinking ship. He touches on phobias and fetishes and leads us into the final section of the show. He warns us that this is essentially a lengthy piece of storytelling from which he can’t pull out if we’re not going with it. There’s no danger of that as he’s already successfully hooked your attention with his intelligent work and relaxed wit. The pace does slow, but it’s not a problem.

This is good use of an afternoon slot, performed without gimmicky technology, if only because Ian Fox has had his own run in with the butterfly effect. The show succeeds admirably in being smart, funny and entertaining without a whiff of smugness. (4/5)