Movie Music 101 Nearly two hours of music compiled from some great and not so great films including:- The Good, The Bad and The Ugly, Smokey and the Bandit, Heat, Hot Fuzz, Superbad, Ocean’s 11, Kill Bill, Zombieland, Halloween, Broken Flowers and loads more. This is the kind of stuff I used to play on the Movie Music Show on an Internet radio station.

A to Z of Songs in Films 26 existing songs used in films. Including songs from:- High Fidelity, Slap Shot, American Werewolf in London, Kick Ass, Fight Club, Out of Sight, In Bruges, Grosse Point Blank and The Matrix.

Mentioned in the article “5 Money, Time Saving and Stress Reducing Hints for Fringe Show Production” Dropbox is designed for cloud computing. It always you to sync documents on different computers and is a handy tool for automatically backing up files. You get 2GB free to start with. You can get an extra 250MB by following this link. 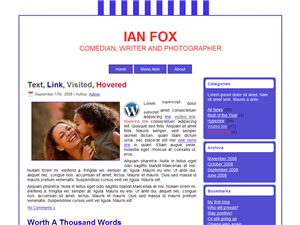